Jamal Bilal is a post-production supervisor who has worked on the likes of The Deuce, Quantico, and Tommy. Over the last ten years, Jamal has gained experience in both production and post-production honing his craft as a storyteller and expressing it through writing, producing, and directing.

In 2020 he had his directorial debut at the New Faces, New Voices film festival where The Norm won the audience choice award. He has written and produced two comic books, the lastest of which, Half Breeds was released this year and has been well received. He produced the indie feature Long Goodbye, among several shorts.

Jamal has had many adventures before finding his way into the entertainment industry. He is a storyteller, who has enjoyed many detours working as an airplane cleaner and loader, an academic advisor at a community college, and he's even spent a little time on the line as a steakhouse cook.

Jamal is also a burgeoning entrepreneur having founded two fledgling companies both in the pursuit of developing outlets for creators to show their talents. Same But Different is a film development and production company, and Between The Page turns written poems and stories into wearable art. But Jamal isn't all work, he enjoys learning to surf, reading sci-fi and fantasy novels and the odd comic book, riding his bike and lifting things up and putting them down.

Why Did I Become an Instructor on Sivana?
I enjoy helping others on their journey and believe that any knowledge we have the fortune of collecting deserves to be share. We all have a story that needs to be told.
Links
Personal Webpage 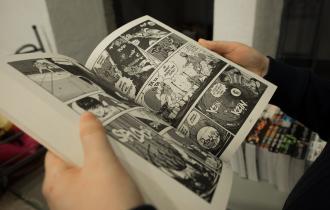 $45 per hour
Lets make a comic: What elements do you need to create a comic ? and where can you find them.
Follow
Save

Create a Subject so you can share your expertise with the world!